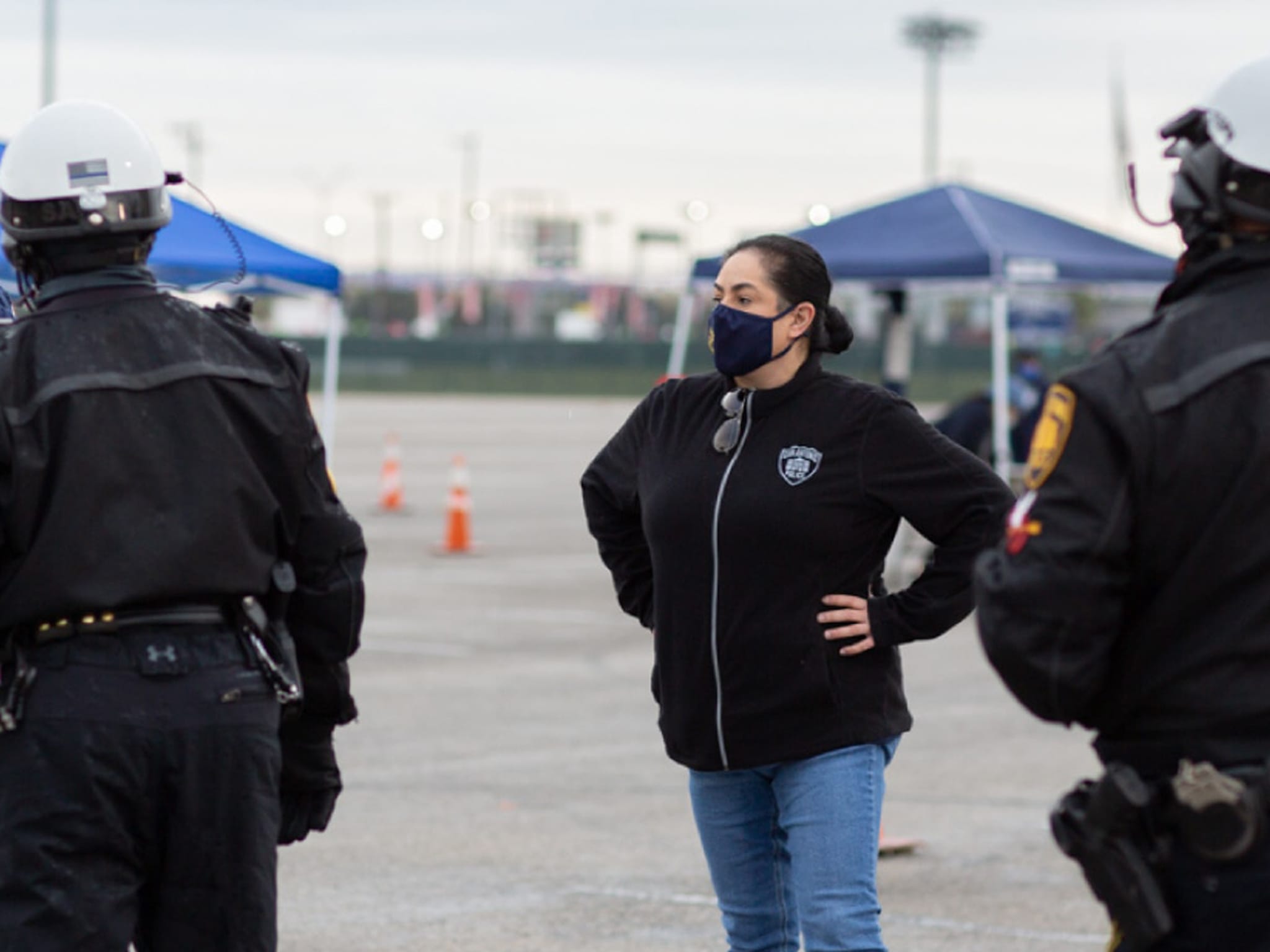 Even as a child, Amanda Viera knew she wanted to be a police officer. Some of her earliest memories include seeing her mom in uniform and knowing how proud she was to wear it. Growing up in a law enforcement home meant that she got a first-hand look at what it means to serve, both the pros and the cons. “My mother was a great role model and certainly my inspiration,” she says. Now, as a mother herself to “one great kid and the greatest joy in my life,” she’s proud to wear the uniform and serve as a role model to her daughter and to other young people in the community.

Officer Viera is a 17-year veteran of the San Antonio Police Department. Assigned to the Traffic Unit for the last 13 years, she was recently elected by her peers to serve as Secretary on the Executive Board of the San Antonio Police Officers Association (SAPOA). As someone who’s always been involved in giving back as a police officer, her service with SAPOA gives her the ability to do even more. “Now, I not only get to serve the community but I also get to serve our membership, which is truly an honor,” she says.

One of her tasks as Secretary includes oversight of SAPOA’s non-profit community outreach organization, “Blue Cares.” Officer Viera says Blue Cares is “truly special to me and now I am afforded the opportunity to showcase how much San Antonio Police Officer’s give back to the San Antonio community.” She says that most people are amazed when they find out just how much charitable work SAPOA does in the community. As an example, she notes that in 2015 she attended a conference hosted by the NYPD Police Union. As union officials were briefing visitors on their community involvement in New York City, they noted that they were sponsoring “one” family for the first time over the holidays. “They were absolutely floored,” she says, to hear that SAPOA sponsors thousands of families during the holidays by donating toys and other gifts to kids and families from some of San Antonio’s most disadvantaged neighborhoods. “They were even more shocked to hear that we have been doing it for decades,” says Officer Viera, adding that “there are so many other things we [SAPOA] do collectively to give back to our community, that unfortunately most do not hear about it, but that is all about to change.”

Aside from the personal fulfillment she gets out of her job as an officer and as a member of the SAPOA Executive Board, Officer Viera does see some serious challenges facing the profession. She says that “right now is an especially difficult time to be in this occupation. Police Officers are being collectively clumped as a whole, holding great officers accountable for the action of a few bad ones.” She says that the media’s singular focus on a few bad examples, “creates a significant level of mistrust between the community and local law enforcement.” Aside from making her job more difficult, this media focus on the bad while ignoring all the good being done by law enforcement does a disservice to the people, who rely on trust of the police to ensure the safety of their individual neighborhoods and the city as a whole.

One other side effect of this biased view of police officers is that the average citizen may be unaware that the San Antonio Police Department is actually one of the country’s leading and most progressive police departments. “We are not only at the forefront in terms of training, but also in our policies and procedures. The San Antonio Police Department is considered ‘The Model’ for policing by national law enforcement organizations in Washington D.C.” She notes that because the department is so well trained, that “we have been able to serve the community and do it effectively with more than a thousand officers fewer than the city of Dallas.  If that isn’t cutting edge, I don’t know what is.”

Officer Viera clearly loves her work and is dedicated not only to working with her colleagues to be even more effective in her job but also in creating additional ways to give back to the community and further strengthen the bond of trust that the people of San Antonio share with their police officers. If she could speak directly to the average citizen, Officer Viera says she would say “thank you for your unwavering support for the Men and Women in blue and continue to pray for us. We absolutely love our community and work hard each and every day for you and your family. You are being served by one of the best Police Agencies in the Nation.”