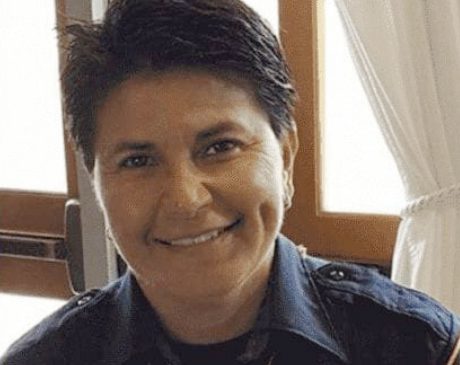 She was born and raised just outside Houston, but Detective Henry Ann Charles, a 30-year veteran of the San Antonio Police Department considers San Antonio her real home. In her most recent assignment, Det. Charles served in the Central Service Area’s Crisis Response Team, where she specialized in domestic violence cases. As she prepares to retire this month, Det. Charles can truly say that she has seen a lot of the worst but also more of the best in San Antonio.

When asked why she decided to become a police officer, the detective says it goes back to how she was raised. Her parents were community-oriented and instilled a spirit of “paying it forward” in their children. Her dad, a pipe fitter by trade, coached little league for fifty plus years and her mother was an educator at the local elementary school for thirty years. Education was a big priority in her family. In fact, being a teacher came in a close second when it came to a career choice.

Henry Ann was always fascinated by police work even as a child. In her small town outside of Houston there was a parade every October, and she remembers that in that parade, police officers always led the way. Seeing how proud those officers looked when they marched and rode at the front of the parade, and how they were respected as they stood for safety and service in the community, all made a big impression on her.

Her parents were supportive of her and all her siblings, encouraging them at every level. After graduating from Wharton County Junior College, Henry Ann joined the Matagorda County Sheriff’s Department. In 1988, she found out that the San Antonio Police Department (SAPD) was hiring, and she also heard they offered the best pay and benefits in the state. She applied and needless to say, she got a call, attended the training academy, and graduated with the Class of ’89 Alpha.

Since then, Det. Charles has served in many capacities on the force: Police Officer, SAPD Honor Guard member, Memorial Festival Coordinator and Field Training Officer. In 2011, she was promoted and spent five years in cover units-drugs and property crime, and finally, in 2018, she landed in what she considers the best unit to serve in, family violence. It’s here where she found she could do the most good for people and really “pay it forward.” In her role in this challenging unit, she says she sometimes sees the same victims over and over, “but we never say ‘I told you so.’” The “greatest feeling,” she says, “is when you can help some out of that cycle of family violence.”

In light of recent attention on policing methods around the country, and in San Antonio in particular in light of the recent Proposition B election in May, Det. Charles says that she feels San Antonio rejected Prop. B because SAPD has a different relationship with the community than do departments in other large cities around the country where you see a lack of trust between the citizens and the police departments that serve them. “Our department is a big melting pot,” she says, “just like our city. Our city government, even some of our businesses are pretty diverse, and our department is no different. The makeup of our police force really mirrors that of the city. A lot of the people I work with live here in the city and were raised here,” she continues, “our officers have a shared experience with the communities they are policing and when you have those shared roots, the benefits of that spill out to everyone — the people, the department employees, the officers — and that makes us all want to work together to keep our city safe.”

While giving praise to city and department leaders for this, she says that the department must still work proactively to achieve minority representation and that they still have a ways to go, especially for female representation on the force and in the top ranks of leadership. She notes that when she first got on the force, “there were less than 100 women, and minority females was maybe a tenth of that.” Women are an “untouched resource” for the department. She adds: “We may not always have the same physical strength, but we’re just as good at leading and problem-solving. Being a Latina female has afforded me a lot of opportunities and I believe my career has opened my eyes to a lot of what’s going on in the world and made me a better person.”

“Recruitment is important…so is discipline”

When asked about the criticism police sometimes get about collective bargaining or pay and benefits, she says that all of these are some of “the best ways to keep good officers and attract good officers. Recruitment is important, and yes, so is discipline. We have strong disciplinary measures in place, [SAPD] is a leader, but can we do better, we want training, we will listen, we will learn. We know things have changed in the country. We just want to be able to still have a voice in our pay and benefits.” Det. Charles thinks that the public sometimes doesn’t see the whole picture when it comes to the job of policing. The job requires officers to play many roles, including counselor and mentor.

If there is any advice she would give to someone who wants to be a police officer it’s this: first, we need you, and second, this is not a decision that one person can make without lots of thought. She says “It’s a very giving job…there’s a lot of times when you won’t get a lot of praise, people won’t pat you on the back, but it’s a job that has a lot of rewards. If this is the job you want, I’ll support you, but it’s a job that will take a lot out of you and your family.”

“San Antonio really does back the blue”

Det. Charles believes that San Antonio is one of the greatest big cities in the country, but more importantly, she feels it’s one of the safest. The city, she says, has “treated me fairly and well,” and as she prepares to retire and seek new opportunities, she’s proudest of the fact that “the police have a good relationship with the citizens. San Antonio really does back the blue, and that’s what’s kept me safe all these years.”