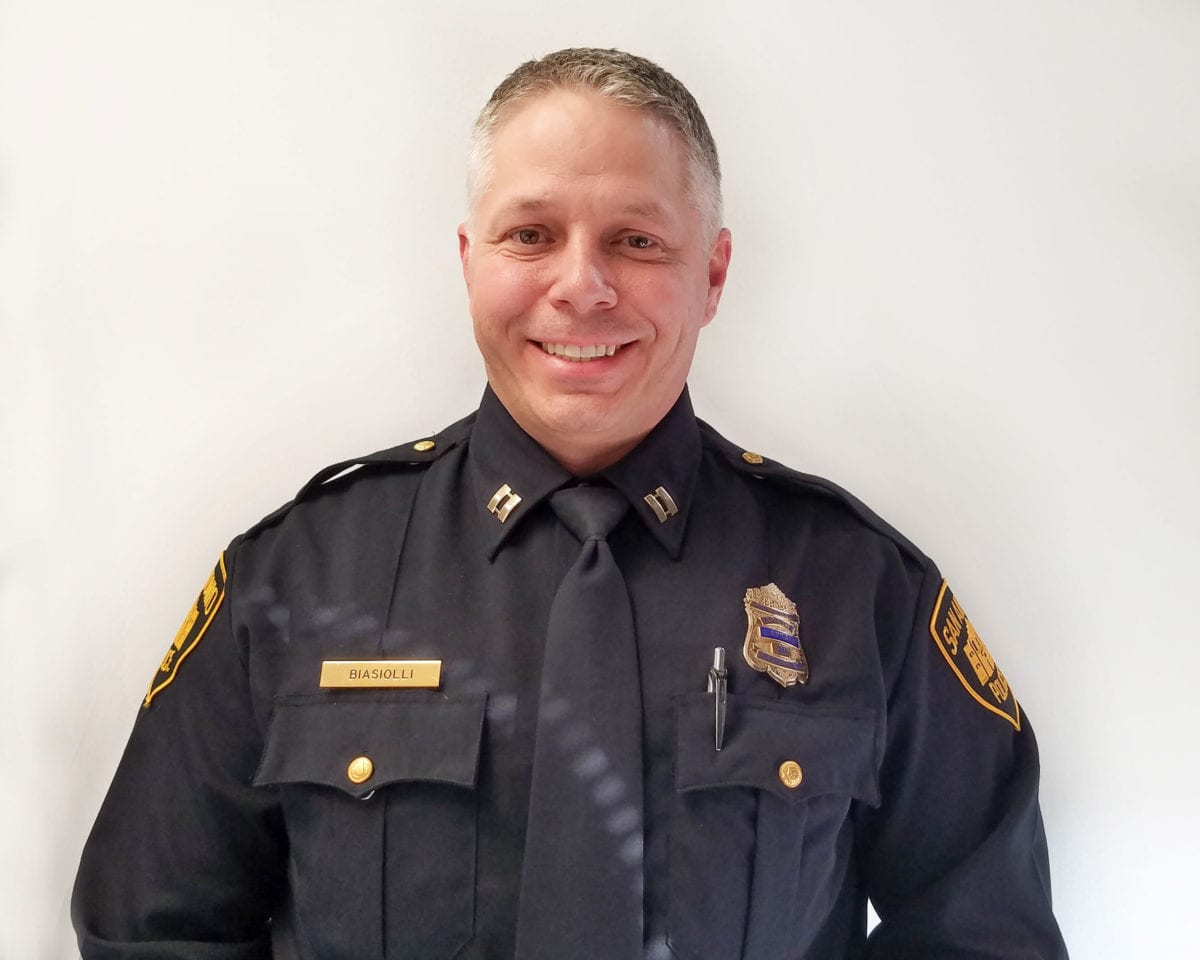 Captain Paul Biasiolli is no stranger to making headlines. In 2016, he made local news when he and a group of San Antonio Airport Police Officers answered a call for help from thousands of miles away in New Jersey. An officer with the West Deptford Township Police Department in New Jersey had a close friend in San Antonio who had missed her flight to a rehab center in Florida. She was a struggling addict who could have easily left the airport and given up on her shot at a sober life if she was not found right away. Biasiolli and three other officers answered the plea from the New Jersey Officer and began the search for the woman who was already going through withdrawals. The officers found the woman, purchased food for her, and stayed with her to make sure she made her flight out, perhaps saving her life in the long run.

Captain Biasiolli’s will to help others may have come from his father, a former San Antonio Police Officer, who retired as Lieutenant just over 10 years ago. Having graduated from the police academy in 1993, Captain Biasiolli has been with the force for almost 25 years, working in a variety of areas, including Bike Patrol, Vice, Tactical Response Unit and currently, Commander at the Airport Police Department. Captain Biasiolli describes his job as a law enforcement officer as “a calling.” He adds, “It’s not a job for everybody and it can be a dangerous job. But it’s not just a job, it’s a career!” On top of his duties at the airport, he is also the father of an 18 year-old daughter and 15 year-old son. He is also attending college, and later this year, will earn his Bachelor’s Degree in Justice Administration with plans to continue his education working toward a Master Degree.

Captain Biasiolli has been heavily involved with Blue Cares, the San Antonio Police Association’s outreach organization. He’s been giving back to the community for years and has had a long and respectful relationship with the program. As the Chairman of the San Antonio Police Benevolent Fund, he provides donations to the Sporting Clay Shoot and the Blue Santa Golf Tournament. During the military’s Holiday Block Leave, about 5,000 military personnel travel out of the airport before Christmas and both organizations partner up to make and hand out snack bags to the travelers and thank the military personnel for their service in person.

Each year, the Benevolent Fund provides scholarships to the graduating seniors of a member of the Benevolent Fund. Out of over 60 available applications, 25 applicants are selected and given $1,200 in scholarship money. “To see that impact you make in these young people’s lives is very rewarding to us and seeing how intelligent our member’s kids are is also very rewarding,” Captain Biasiolli said.

In his time at the helm of the Airport Police, the Department has developed a strong commitment to the Special Olympics, participating in their Polar Plunge, Tip-A-Cop, and Bowling for Badges events and providing monetary donations to their cause in partnership with The San Antonio Airport Police Officers’ Association.

“I think we (police officers) have a very good relationship with our citizenry but what you hear most is the negative. But we are supported and appreciated, especially here in San Antonio!” Captain Biasiolli loves the city of San Antonio and hopes to continue to give back to his community as long as he’s able. He continues, “We are very blessed. We have a great job with great benefits but even if we didn’t, that’s just part of who I am. It feels good. It’s a rewarding aspect of this job because we have that opportunity to give back. There are so many people that are less fortunate than us that we’re able to help out, especially in their times of need.”